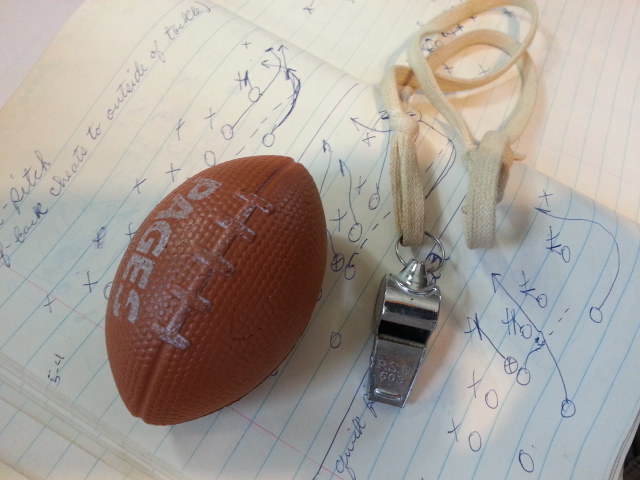 My Dad loved American football and played it in high school, the Marines and college. He was a science, biology, phys ed and health teacher with FWCS from around 1961 until the early 90’s. He coached football at Kekionga Junior High in the mid 1960s and in 1967 when I was about six years old, he became the 9th grade football coach at the brand new Jefferson Junior High in Fort Wayne.

I don’t remember watching any practices but I do remember the equipment room with all the thigh, knee and shoulder pads and the helmets. I remember home games at Jefferson.  I was a grade schooler at Glenwood Elementary in Fort Wayne and the school secretary would drive us to Jefferson to see the games after school. Her son was my Dad’s QB for Jefferson so it worked out so I could see the games and go home with my Dad afterwards.

The neatest memory I have was going to the gas station on Stellhorn Road at the curve where CR Carpet is now in the summer.  There weren’t weight rooms back then in junior high schools so my Dad used something else for conditioning.  He would pick up used tires for each individual on the team to use.  I asked him later how they used the tires. Part of the time each player would run with their tire in their arms around the football field or stand in place and press it over their head or curl it. The other drill was each player would have a rope around their waist tied to their tire and they would run with the tire dragging behind them to simulate a tackler hanging on to them. He said the power positions like guards, tackles, running backs and line backers had truck tires while speed positions like QB, TE, WR had car tires.

The funniest thing I remember as a kid was seeing my Dad flapping his arms up and down like a bird during a game.  Later, he explained he was signalling a play to his team and you had to keep it simple for 9th graders.

Recently my mom gave me my dad’s playbook from Kekionga and Jefferson with his plays, exercises and practice schedules. It was fascinating to see all the plays and especially the exercises.  One exercise I was surprised to see in his list was the duck walk which is a gruelling but effective leg exercise. I used to do these with my old training partner, Kit,  and later by myself.

My dad probably would have loved to see me play football although I never did. I did try out for 7th grade football at Lane Junior High at his suggestion. He could tell I hated it and never said another word about sports again. That’s what made him a good Dad: he didn’t live his past through me – he let me be me.

Now that I’m in my 50’s I work out like a maniac doing martial arts with Sensei Basche, group classes at Spiece Fitness with Becky, Hannah, and Kasi and with Denise, my Spiece workout partner. Pretty ironic for someone who disliked sports and exercise as a kid.